The 2019 Europeana Annual General Meeting took place from 27th-29th of November in the historic National Library of Portugal, Lisbon, whose vast and diversified heritage covers almost ten centuries of Portuguese history and culture.

AGM is the official General Meeting of Europeana which takes place every year with participants from all over the world who come together to explore, contribute and transform the world with culture through workshops, discussions, panels, interaction and networking.

PostScriptum, the official Europeana delegate in China, attended the “2019 Europeana AGM” and showcased its project “China meets Europeana” during a specially designed session of the Conference.

“China meets Europeana” is an initiative of PostScriptum aiming to create a cultural bridge between China and Europe through the projection of distinguished Chinese collections in Europeana. Since the beginning of the above mentioned project, multiple Universities, Educational Institutions, Cultural Organizations, Cultural Departments of large Technology Companies, Libraries and Museums established in China have demonstrated a huge interest towards this direction. 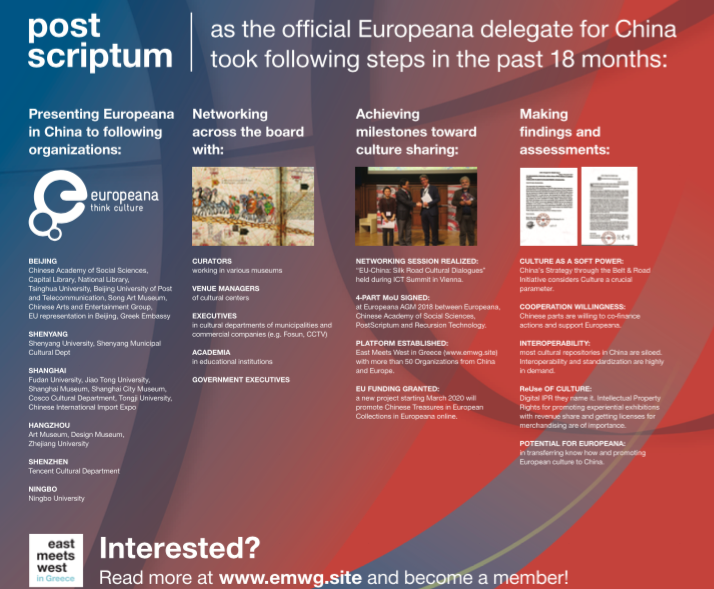 As a result, a 4-part MoU has been signed among Europeana, the Chinese Academy of Social Sciences, PostScriptum and Recursion Technology during the Europeana AGM of 2018, whereas a Networking Session entitled “EU-China: Silk Road Cultural Dialogues” was held during the ICT Summit Meeting in Vienna.

Additionally, PostScriptum is one of the partners of “Pagode” project. “Pagode” is a Europeana Generic Service funded under CEF Telecom programme which aims to demonstrate how European and Chinese Cultures are intermingled. To do so, it will ingest Europeana with 10,000 new objects with Chinese-related content and foster the metadata improvement of 20,000 objects already on Europeana for better search and user experience in the Europeana platform.

The project will also deliver guidelines and best practice to enrich a protocol of interaction with the Europeana aggregators as well as one physical exhibition, resources and editorials about Chinese Cultural Heritage in Europe and a new thematic collection on Europeana.

Last but not least, the “East Meets West in Greece” platform constitutes part of the general effort of PostScriptum to bring closer the two civilizations with multiple organizations participating from China and Europe. EMWG incorporates all the latest news and information of PostScriptum’s projects regarding the cultural exchange between China and Europe.